Home Articles The precious participation of the Huntington’s disease community in the quest for...

As long-awaited clinical trials of new drug candidates for Huntington’s disease get underway, scientists have intensified collecting information from research study participants to quickly and accurately test the effectiveness of the potential remedies.
This was a major theme of the 10th Annual HD Therapeutics Conference, held February 23-26 at the Parker Palm Springs hotel in Palm Springs, CA. (Click here to read my initial report on science and solidarity, filed during the conference.)
The event was sponsored by CHDI Foundation, Inc., a nonprofit, virtual biotech focused solely on developing HD treatments and the largest source of private HD research funding. Backed by wealthy donors, CHDI has an annual budget of about $100 million.
“The thing that I’m keying on is what I would call human data,” Robert Pacifici, Ph.D., CHDI’s chief scientific officer, told me in an interview on February 26. “Obviously when we do drug discovery we think about a variety of model systems – everything from worms to flies to zebrafish to sheep and songbirds and everything in between.
“But we both know that the only organism that actually has Huntington’s disease unfortunately is the human. So for a long time I’ve been saying that there’s nothing more precious and valuable to a drug hunter than an observation that’s actually made in the population that they seek to treat, in our case Huntington’s patients.”
Dr. Pacifici recalled how genetic data from hundreds of people from dozens of families led to the discovery of the huntingtin gene in 1993. Thanks to those efforts, treatments aimed at lowering the amount of mutant huntingtin RNA and protein in the brain cells of HD patients are on the verge of entering clinical trials, he added.
“Now what we’re asking for is to really start getting more specific about the observations [in humans] that we want to make and how we’re going to leverage them,” Dr. Pacifici explained.
You can watch my interview with Dr. Pacific in the video below.
Human Data ‘Precious’ for Huntington’s Disease Drug Hunters: An Interview with Dr. Robert Pacifici from Gene Veritas on Vimeo.
Key role of modifier genes
Dr. Pacifici cited two major examples of new human data revealed at the conference that will a have profound impact on the quest for treatments.
“We’re literally at the precipice of identifying what are modifier genes,” he said, referring to the research presented by Jong-Min Lee, Ph.D., of Massachusetts General Hospital. “It’s just incredibly exciting to me.”
An abnormally expanded huntingtin gene is the principal cause of HD, but other so-called modifier genes also help determine the age of disease onset.
“Why is it that one person’s Huntington’s starts earlier than another?” Dr. Pacifici asked. “That’s tragic.” More positively, it also means the other person’s onset starts later. “Well, that’s exactly what we want a drug to do.”
Human data has played a major role, he pointed out. With thousands of HD-affected people participating, researchers have been able to examine their genetic composition, involving not just their Huntington’s gene, “but their entire genome, to do what’s called a Genome Wide Association Study, or GWAS, and figure out what it is that’s different about individuals that causes one person’s Huntington’s to start earlier than another,” Dr. Pacifici explained.
In his presentation titled “Medication of Huntington’s disease by genetic variations,” Dr. Lee reported how the large research team seeking modifier genes has narrowed its search to chromosomes 3, 8, and 15. (Located in all of a human’s cells, the 46 chromosomes are long, twined strands of DNA containing a person’s entire genetic heritage.) According to Dr. Lee, chromosome 15 has both a “bad” and “good” modifier, with a six-year difference in onset between individuals having one versus the other.
“If we can identify that [good] gene and figure out how it’s doing that, then what we have is a very specific set of instructions for drug hunters to make a compound that does that same thing,” Dr. Pacifici said. 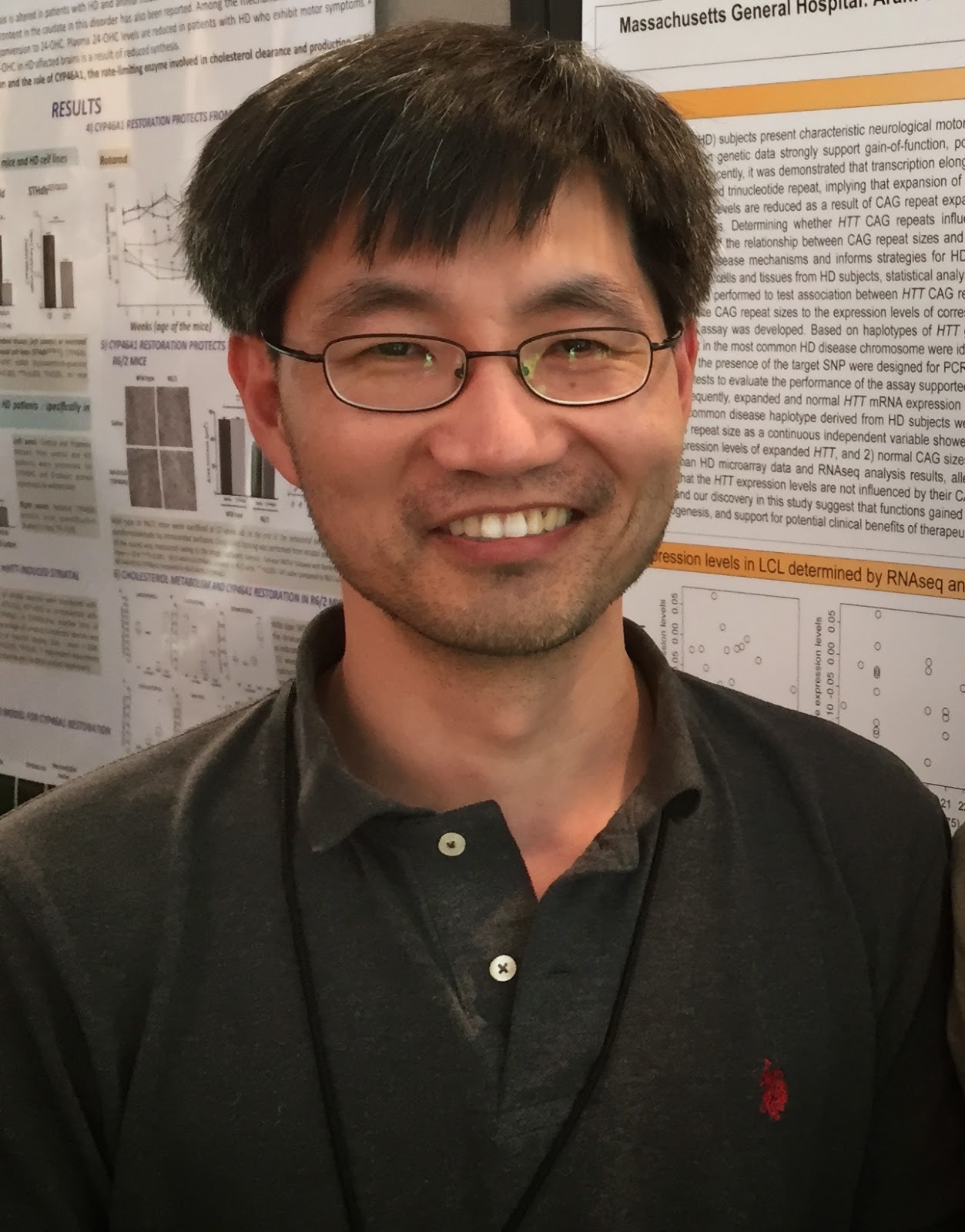 ‘Cheating a little bit’ with biomarkers
The second example involves cerebrospinal fluid (CSF), the liquid that bathes the brain and circulates up and down the spine. Researchers have been searching for HD-related biomarkers in samples of CSF taken from volunteers afflicted with the disease as well as so-called premanifest people, individuals who (like me) carry the gene but have yet to show classic, easily notable symptoms such as involuntary movements (chorea and other types).
Dr. Pacifici defined biomarkers as “a way of cheating a little bit” to get signals without waiting for the more time-consuming and more expensive later phases of a clinical trial.
The human brain can only be studied directly only after a person has died, as pointed out in a talk on CSF by Ed Wild, M.D., Ph.D., of the University College of London. Imaging methods such as MRI are helpful but very limited. So scientists are putting ever greater emphasis on finding signals in the CSF such as mutant huntingtin protein and other biomarkers.
CSF provides a “snapshot of what’s going on in the human brain,” Dr. Pacifici observed, adding that it might indicate in a clinical trial whether a huntingtin-lowering drug is having the desired effect.
Clinical trial administrators would still need to wait many months to get meaningful observations about actual effects on symptoms, but seeing what the drug does at the molecular level is a key first step.
“In other words, we don’t want to give the drug [. . .] and hope that after three years of waiting that we’re going to have an effect,” he said. “We want to know right away that that drug was doing the job that it was charged to do, in this case lowering huntingtin levels.”
A CSF study
Describing the analysis of CSF from HD patients in a research study of twelve individuals that he helped direct, Dr. Wild observed that the closer a premanifest individual was to probable onset, the higher the level of mutant huntingtin found in the CSF. Similarly, among affected individuals higher levels of the mutant protein correlated with worse symptoms.
Dr. Wild and other scientists are still striving to determine the specific origin of the mutant huntingtin found in the CSF. At this point they hypothesize that it comes from neurons, a specific type of brain cell.
Scientists aim to improve CSF collection efforts and obtain a clearer understanding of what occurs in the CSF through a new, CHDI-funded project called HDClarity. The initial research sites are at University College of London, the University of British Columbia, and the University of Ulm, Germany.
You can watch Dr. Wild’s presentation in the video below.
Biomarkers and Biological Insights from Huntington’s Disease Patient Cerebrospinal Fluid from Gene Veritas on Vimeo.
The rise of clinical trials
The need for clinical trial volunteers will increase dramatically as the number of trials grows rapidly.
With a total of nine active trials, 2014 had an “unprecedented amount of activity in clinical trials in Huntington’s disease,” Ray Dorsey, M.D., a professor of medicine at the University of Rochester and the president of the Huntington Study Group, stated in an overview of recent HD trials.
These trials included the two largest-ever regarding HD: a study ofcoenzyme Q10 with 609 participants and a study of creatine with 553 participants. Both were halted because of lack of efficacy, but helped scientists understand the need for better evaluation of substances before taking them into a trial, Dr. Dorsey noted.
Last year brought one of the few successes in HD clinical trial history: the highly favorable results of Auspex Pharmaceuticals’ testing of its compound SD-809, which reduces chorea substantially and with fewer and milder side effects than its predecessor drug, tetrabenazine.
Presenting a chart of clinical trial trends, Dr. Dorsey demonstrated that the number of HD trials is growing exponentially: from four trials in 1999-2002 to 28 trials in the period 2011-2014.
“I think we’re poised for success,” he concluded. 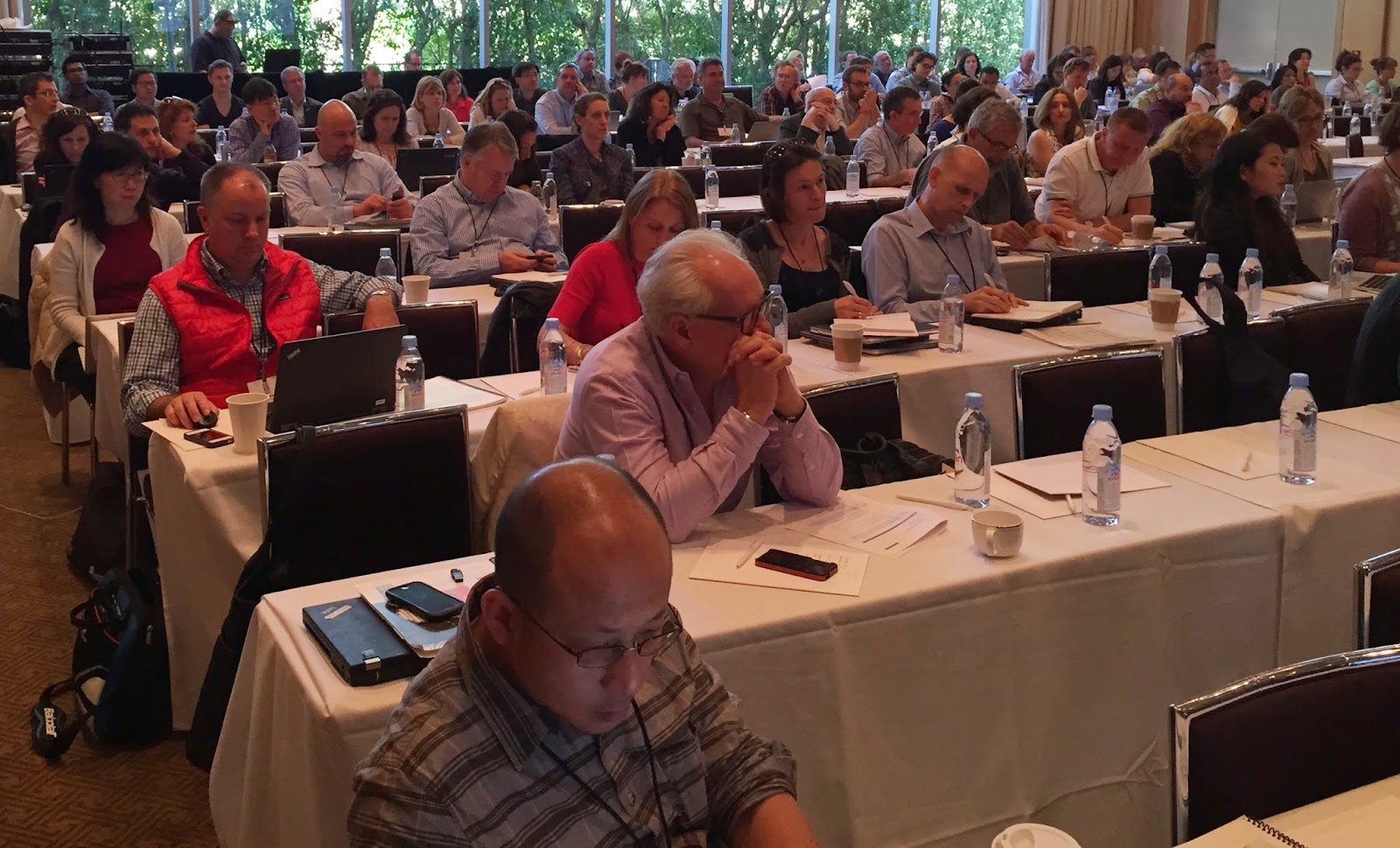 Assessing the potential of gene-silencing
In reviewing the clinical trial outlook for 2015, CHDI’s consulting medical director, Bernhard Landwehrmeyer, M.D., Ph.D., noted the continued upward trend, with six active trials.
Dr. Landwehrmeyer described the plans for a Phase I gene-silencing clinical trial by Isis Pharmaceuticals, Inc., and Roche. This approach seeks to attack the causes of the disease at its roots (click here to read more).
Isis’s senior vice president for research, Frank Bennett, Ph.D., stated in his conference presentation that the trial would begin by the end of the second quarter, but Dr. Landwehrmeyer predicted it would start later in the year. It is only the very first step in gene-silencing treatments for HD, he stressed.
Nevertheless, he observed that many other companies and labs are working on their own versions of gene-silencing treatments for HD. The chart he displayed showed 14 other entities in addition to Roche and Isis.
“It’s important that we have such a rich toolbox in attempts to make gene-silencing a therapeutic reality,” Dr. Landwehrmeyer said.
He noted that the Isis/Roche trial is unusual because it must include symptomatic patients, who will receive the gene-silencing drug via a spinal tap. Typically a Phase I trial accepts only healthy volunteers because it is testing for safety and tolerability, not for efficacy.
The trial will take place at HD centers in England, Canada, and Germany that have in-patient intensive care monitoring facilities, he noted.
Dr. Landwehrmeyer said it was important to set realistic expectations for the HD community, which anxiously awaits good news about gene-silencing because of its potential to significantly impact the disease.
“You are NOT missing the boat, if you do not participate in the Isis study,” he said, referring to HD-affected individuals. Establishing safe and effective gene-silencing therapies for HD will still take “decades.”
Once trials prove them to be safe and effective, these drugs can reach the market and become available to all HD families. 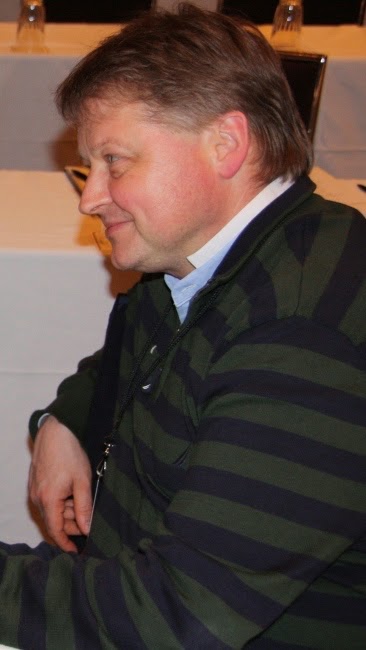 Bernhard Landwehrmeyer, M.D., Ph.D. (photo by Gene Veritas)
Big challenges remain
Dr. Landwehrmeyer also commented on the other trials taking place this year: Pride-HD (to test pridopidine); APACHE and Amaryllis (to test“Viagra for the brain”); LEGATO-HD (to test laquinimod); and a forthcoming trial in deep brain stimulation.
In all, he noted, at least 1,500 HD patients are expected to take part in clinical trials this year.
“That’s on the one hand fantastic,” he said. “But timely recruitment into these studies has become an issue.”
Some HD study centers are underutilized, while others are overloaded, he noted. The number of trial participants is further restricted by inclusion/exclusion criteria (for example, the particular disease stage of the patient). Pharmaceutical companies should enhance a “culture of cooperation” regarding trials, he said, and regional and national patient advocacy organizations need to activate their networks.
Enroll-HD, the global platform, research project, and family registry aimed at facilitating clinical trials and the discovery of treatments, recently reached a milestone with its 5,000th registrant, but needs to grow to as many as 30,000, Dr. Landwehrmeyer observed.
Hoping for an end to conferences – and HD
The 10th Annual HD Therapeutics Conference had numerous other compelling presentations on the search for treatments. Click here to visit my video album, where you can view many of the presentations.
… READ MORE
Source: At Risk for Huntington’s Disease
Tweet
Pin
Condividi10
10 Condivisioni

New way to identify and track progression of Huntington’s disease